Czech people have been growing Hepaticas for ages. Especially old women used to grow them together with snowdrops in their typical colorful country gardens, considering both plants a symbol of the upcoming spring. Nevertheless, Hepatica comeback and its concentrated cultivation can be dated back to the close of the 20th century. The same goes for England and Germany, both countries have always been associated with Hepaticas. WWI and WWII time was really unfavourable. Later when war consequences were gone, Hepatica revival was demonstrated in their popularity increase among individuals. There also arosen first nurseries which added Hepaticas to their pricelists. At the beginning of that period it was just elementary plants, identical with those which were easy to find (plentifully) in suitable locations. To be a plena form owner that was a hardly realizable dream of every Hepatica lover. Plena form was as unreachable as Olympus.

It was like a dream when I received the very first Hepatica catalogue from J. Peters company (from Uetersen) in 1995. That issue contained no pictures but 10 types of Hepatica plena were mentioned, 6 originally coming from the Czech Republic. What? They CAN be found in our country? , I wondered. That new piece of information was a great surprise for me and I became crazy about these plants. Nevertheless, in the catalogue issued the following year there was no longer such a wide choice of Czech Hepaticas and J. Peters told me personally that those 6 types had been in fact just one. Interestingly, those 6 plants were found in all corners of our country. Did all these originally grew in the nature or were they spread after propagation? One word led to another and I decided to find out the answer. There was no literature, no reference, nothing besides a couple of speculations. In those days I had no idea how much time and effort it would cost me.

I am a member of Skalničkář association based in Prague. Every spring we arrange various trips to gardens, rock gardens and arboreta of other members. As far as I can remember, I have not as yet missed any of them. It was tens of gardens throughout the whole country where besides visiting and gathering new pieces of information I always asked: Arent you, by aby chance, into Hepaticas? To make a long story short, I am going to mention three cases that will hopefully shed light on history of Hepatica nobilis plena blue. I will also try to give reasons as to why I modified name of the plant Ive been growing and propagating. Its name was completed by Czech Form title to mark it off other Hepaticas plena which are recently grown in Europe.

CASE I, location: Letovice by Brno Mr. Martínek is the owner of a splendid garden with travertin rock gardens located in the midst of the forests. He learned a trade by a regarded holticulturist in Boskovice near Brno in the 30s of the 20th century. Mr. Martínek vividly remembered 10 m long pathway leading to the house of his teacher, edged by roses and two lines of Hepatica plena blue on both sides. These days it would be considered a real treasure! When the holticulturist died all his property was aliened to his son who digged all plants out and composted them!!! Mr. Martínek, the storyteller was a fair and honest man, so I dont doubt his story at all. The fact that these Hepatica types used to grow in the area around Brno can be demonstrated by their appearance (sporadic, though) in some local gardens so far.

CASE II, location: Jaroměřice nad Rokytnou There existed two nurseries oriented on growing alpine plants in Czechoslovakia in the inter-war period (30s of the 20th century). Their plant range was at a high level, indeed unique in that time. I have catalogues from both nurseries at my disposal. Vejtasa company located in Jaroměřice nad Rokytnou was offering Hepatica plena blue for 4.50 CZK/pc in 1937 Imagine you could get 3l of milk for the same price.

CASE III, location: Černolice by Prague The other nursery well known in Europe, owned by Mr. Stivín and located in Černolice issued its first thicker plant catalogue both in Czech and German in 1942. Hepatica plena blue was offered under Anemone hepatica for 0.75 DM/pc. (Just for your information, that was equal to the price of ¼ kg of salami). More precious alpine plants types ranged from 0.5 to 1.0 DM/pc. Such silly prices indicate plenitude of Hepaticas.

I also met some other eyewitnesses of Hepatica plena blue being located within Czech area after the WWI but unfortnately, all of them were too old to acknowledge the asset of the plant. They could remember it and give description in full details, though. I am going to present more evidence about Hepatica plena location in old times later when the Herbarium of National Museum in Prague is reopened.

At present, Hepatica nobilis plena blue grows in our country in two very similar forms. The first one is visibly smaller, has lighter blue blossoms and is not as amazing as the other one. This one is hard to find and as I was told, it was brought to Brnos arboretum in the early 60s by its creator and manager, Mr. Holzbecher. Thereof it spread to one famous German grower A. Handel living in Postupim who delivered it later to England, to J. Christian company. J. Christian company started offering this type online in 2001, labelled as Hepatica nobilis plena blue Brun, imported from CR. Brun was a grabled name for Brno, where the plant had been originally grown. As stated online, the plant was propagated by cellural breeding with no happy-end. Ranunculacea plants are susceptible to virus infection and die when being propagated by cellural breeding. After such a mishap, this type has been permanently withdrawn from their e-shop.

Now let me come to the latter form which is in fact the only Czech original plena blue form. It features medium growth and has deep green leaves. Yet its leafstalk is not tall, blossoms can be seen easily, especially when buds are about to open. Buds are first dark blue with some lila shade and turn to bright sky color once they are fully opened. The color is regular on the whole blossom surface. Its definitely darker than ´Müssel ´ or ´Walter Otto´ type. Its petals are smaller from the edge to the center of the blossom, not tapered but rather rounded. Blossoms are regular, rather flat, with hardly noticable center. Bigger blooming bunch looks fascinating. Blossoms keep the same color during the whole flowerage, which may take up to one month depending on temperature and on where the plant is situated. This Hepatica is frost-resistant, immune and requires 70% shade once the blooming period is over and comes into leaf, e.i. from June to September. If not protected from sun, leaves could be damaged easily and dark spots might pop up. The plant also features easy buds growth, which enables further propagation. I usually divide plants after 3-4 years The older the bunch is, the easier propagation yet Hepatica tends to crumble into plantlets with their own roots.

Since 1993 Ive personally propagated almost 300 plants (starting at 3 pieces) and sent them to Germany, England and USA. Unfortunately, Hepatica Czech origin was doubted in some cases and this type happens to be sold under various names such as Tschechien, Ladislav or even Materna. I therefore decided to give it one clear English name Hepatica nobilis blue plena, Czech form, which is comprehensible in all Western Europian countries where English is widely spoken. I higly recommend growing trouble-free Hepatica nobilis plena blue Czech Form to everyone. 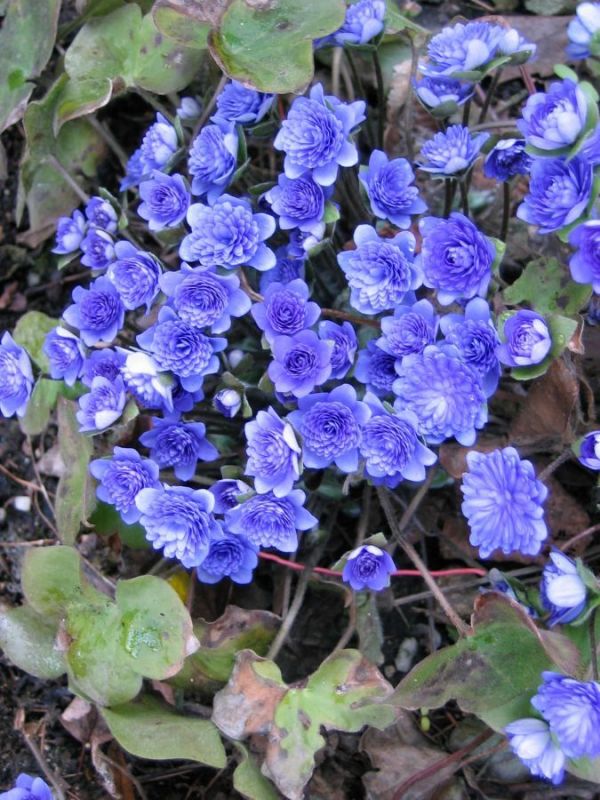